The Growing Necessity of "Characters" in the UFC! When the UFC was first starting to gain national media attention in the sports world during the early 2000’s, many wondered if the combat sport would be just another flash in the pan and fade away in a matter of years. Professional MMA was once considered by critics as a “barbaric blood sport” during the early Renzo Gracie and Ken Shamrock days, but that all changed once a highly enthusiastic businessman named Dana White entered the picture. The Zuffa era of the UFC kicked off after the Fertitta brothers and White purchased the struggling company for $2 million and created ‘Zuffa, LCC’ as the umbrella corporation to the Mixed Martial Arts establishment. Yet, the true key to the success of the company lies within the “entertainment mindset” of White and his fighters.

While most UFC aficionados (such as myself) appreciate the essence and mechanics that are incorporated within the sport, those individuals are unfortunately a very small percentage of the company’s profit margin. The legendary fights between Chuck Liddell and Tito Ortiz was fueled by the obvious dislike that both fighters had towards each other and therefore drew in new fans towards the sport. The conflict between fighters can give off a certain WWE aroma to the sport which is the gold mine that gives the UFC its opportunity to continue to rise in the ranks of the sports world. 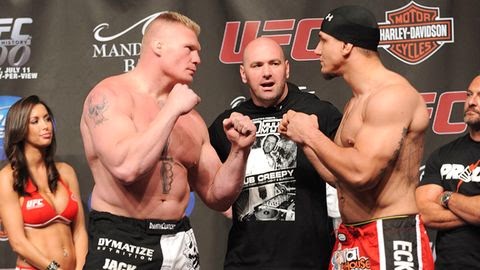 It is not a mistake to call Dana White the Vince McMahon of the UFC because he clearly has adopted Vince’s mindset of doing not only what’s best for the sport, but also for business. What's best for business? Characters. When Dana signed WWE superstar Brock Lesnar to the UFC in 2008 it was clearly for both the athletic prowess that Lesnar possessed and the added entertainment value. During UFC 100 (which currently ranks as the highest UFC pay-per-view buy-rate) Brock's “bully” like persona was a great counter balance to UFC star heavyweight Frank Mir’s “cocky” attitude; which Dana White orchestrated beautifully throughout the media. After Brock’s era of dominance came to an end, a generally unknown wrestler from West Linn, Oregan by the name of Cheal Sonnen came into the picture. Regardless if you are a fan of Sonnen’s or not, one can’t deny the way he revolutionized the sport within the eyes of the national media. 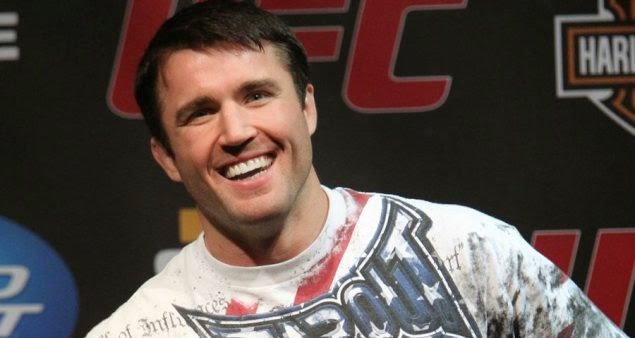 Sonnen possessed the uncanny ability to combine both his WWE like charisma and mic skills with his fighting ability. His press conferences became must see television, and while then middleweight champion Anderson Silva was undoubtedly the best pound-for-pound fighter on the planet, it was Sonnen's microphone antics that sold their fights. Dana White strategically pushed Sonnen as a headliner for many UFC pay-per-views, understanding the value that the fighter had towards both the company and the sport. After Sonnen was released by the UFC, there seemed to be a vacant spot for someone to fill and continue to carry on the mantle of Sonnen and Lesnar. The company seemed to have a bit of that spot filled with female MMA sensation Ronda Rousey, who’s dominance within the octagon and her cocky (with her resume rightfully so) persona has created much buzz around the women’s division of the sport. 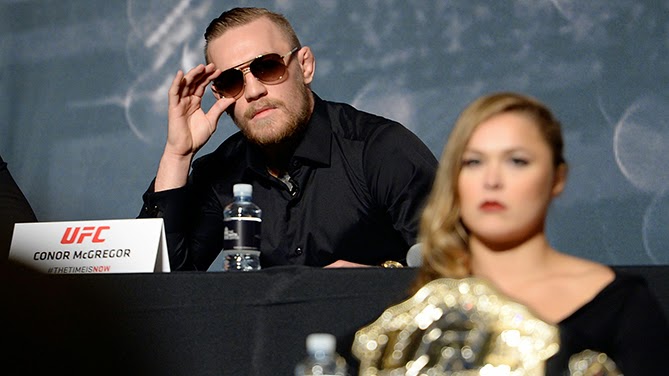 Yet, one can’t deny that this remains a male dominant sport and a male lead is needed to help carry the mother load of the company’s entertainment features. Enter the recent Irish sensation Conor McGregor; currently dominating the UFC’s featherweight division and is preparing to fight Brazilian star Jose Aldo for the championship. Like a breath of fresh air McGregor’s microphone antics perfectly match his in ring fighting style; they’re both tough, rough, raw and unfiltered. He, like the aforementioned Chael Sonnen, says whatever comes to his mind and does not shy away from the media. Whether you root for him or against him, McGregor embraces both sides of the spectrum and utilizes it as fuel for both his interviews and is matches. White has found himself another gold mine in this 26-year-old fighter, who continues to finish his opponents in spectacular knock-out fashion.

Regardless of where this sport goes towards the future, it will forever be "characters" like McGregor, Sonnen, Rousey, Lesnar, Mir, and Liddell that will be the driving factor for this company, and Dana White completely understands this fact. Can these antics get out of hand? Of course. Though with Vince McMahon Jr. Dana White at the helm, the UFC will soon become the most realistic and entertaining version of the WWE that the world has ever seen, and that might not be a bad thing.
Posted by Unknown at 3:31 PM